This site uses cookies to create a better experience for you. Some of these cookies are set automatically because they’re necessary for the site to perform. Other cookies are used for functional, performance, and targeting purposes to enhance your experience by personalizing content and ads, enabling third party content and features, and enabling us to analyze how this site is used.  To learn more, please visit our Legal Notices - Cookie page.

By clicking 'I Accept', you are agreeing to our use of functional, performance and targeting cookies.

Note that by entering data in this application for purposes of obtaining driving directions, you are providing such data directly to Google LLC and/or its affiliates.  By clicking "I Agree" or by using the Google Maps functionality to obtain driving directions, you acknowledge and agree that use of Google Maps is subject to the then-current Google Maps/Google Earth Additional Terms of Service at  https://developers.google.com/maps/terms-20180207#section_9_3   and Google Privacy Policy at https://policies.google.com/privacy

The Faroe Islands, (sometimes called ‘Faeroes’), are a group of eighteen islands in Northern Europe, about halfway between Norway and Iceland. This rugged island has been embarking on a journey to expand its largest port – Port Torshavn. The planned expansion will soon double the port’s square metre capacity and additionally will give Torshavn a new dock with two new quays.

The Faroese based construction company, J & K Peterson Contractors, will be taking on the exciting expansion project and is well known for their vast experience working in harsh conditions. Stein Olvur Peterson, Director of J & K Peterson commented, “We have for many years specialised in port construction and have acquired expertise in working in tough weather environments, like the Faroese. We have also been chosen to work on projects in both Norway and Greenland, because we know how to work and relate to a harsh climate.”

Port expansion is an economic necessity

But why should the port be extended? For the Faroese, the port expansion is considered an economic necessity. The economy is driven by fishing, which overall accounts for 95% of gross domestic product. When that is combined with an increased interest in the Faroe Islands as a tourist destination, expanding the port was an easy decision. Cruise ships will increasingly put the trip past the scenic islands because the current port cannot meet the increase in ship traffic.

Olvur Peterson added, “Future ships, with their increased tonnage, will not be able to get into the current port. Therefore, we are now working to expand the existing port area of 100,000 m², almost a doubling in size. It will also require an extended pier at 1,000 metres.” 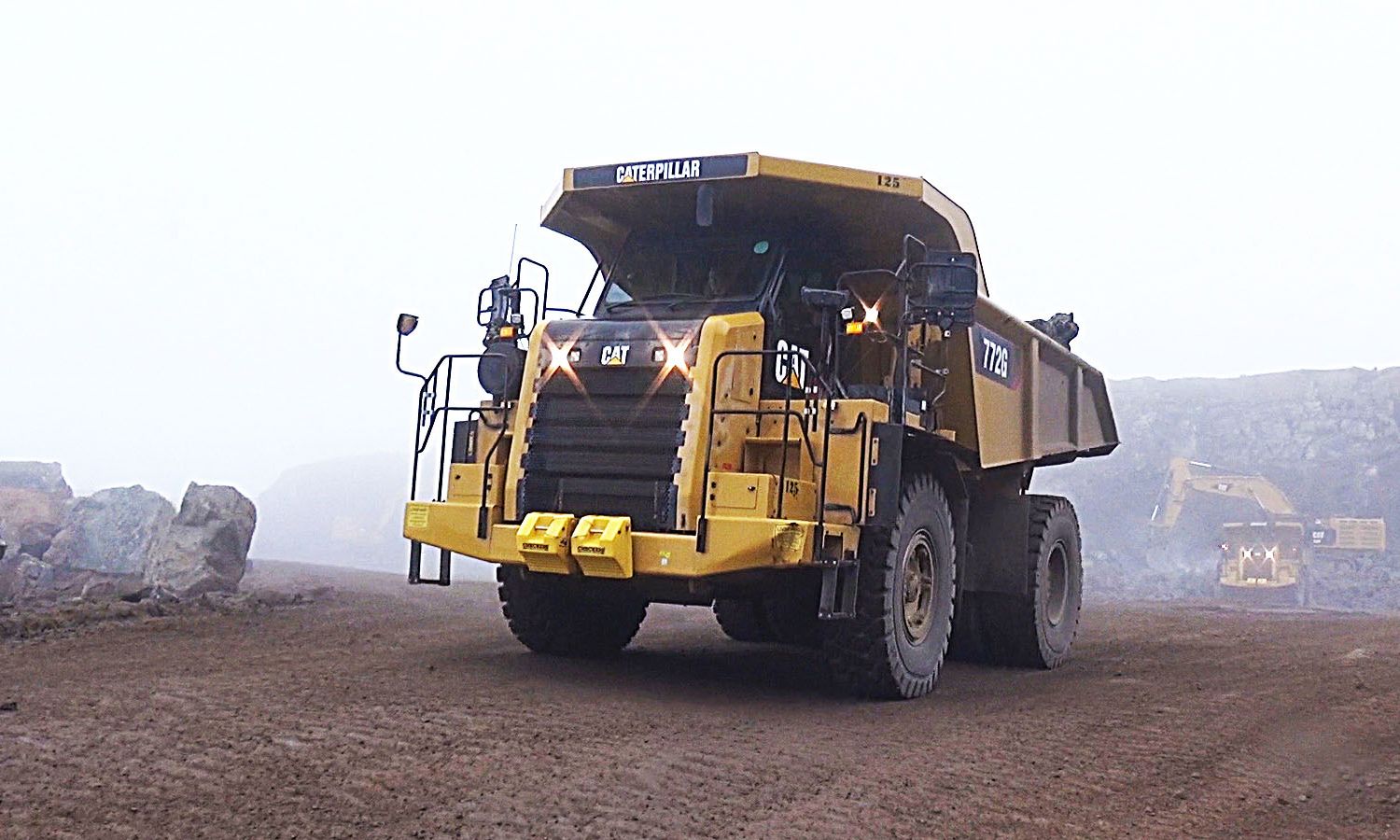 Michael Bahn Jørgensen, Sales and Marketing Director, Pon Equipment DK, commented, “Experts from Caterpillar and Pon Equipment made thorough calculations on what machines would be the most efficient for this project.”

Jørgensen added, “The machines are now working on the project. Prior to this we have been in a dialogue with J & K Petersen for almost one and a half years before we concluded the deal. It is a fantastic feeling to see the machines here at the quarrel and knowing that the machines we suggested are fulfilling the expectations from J&K Petersen.”

The dense fog and sharp wind combined with the thousands of tons of rocks to be unloaded and moved from the quarry, presented the perfect exam for these massive Cat machines. The four 772G trucks with their load capacity of almost 47 tons are working overtime. They run continuously in order to carry all the stones to help complete the port project. Reliability is particularly important as it could delay the entire building process. All machines need to run according to plan, especially with the weather. There can be days at a time when work shuts down because of weather. Therefore, it is important to strike while the iron is hot. 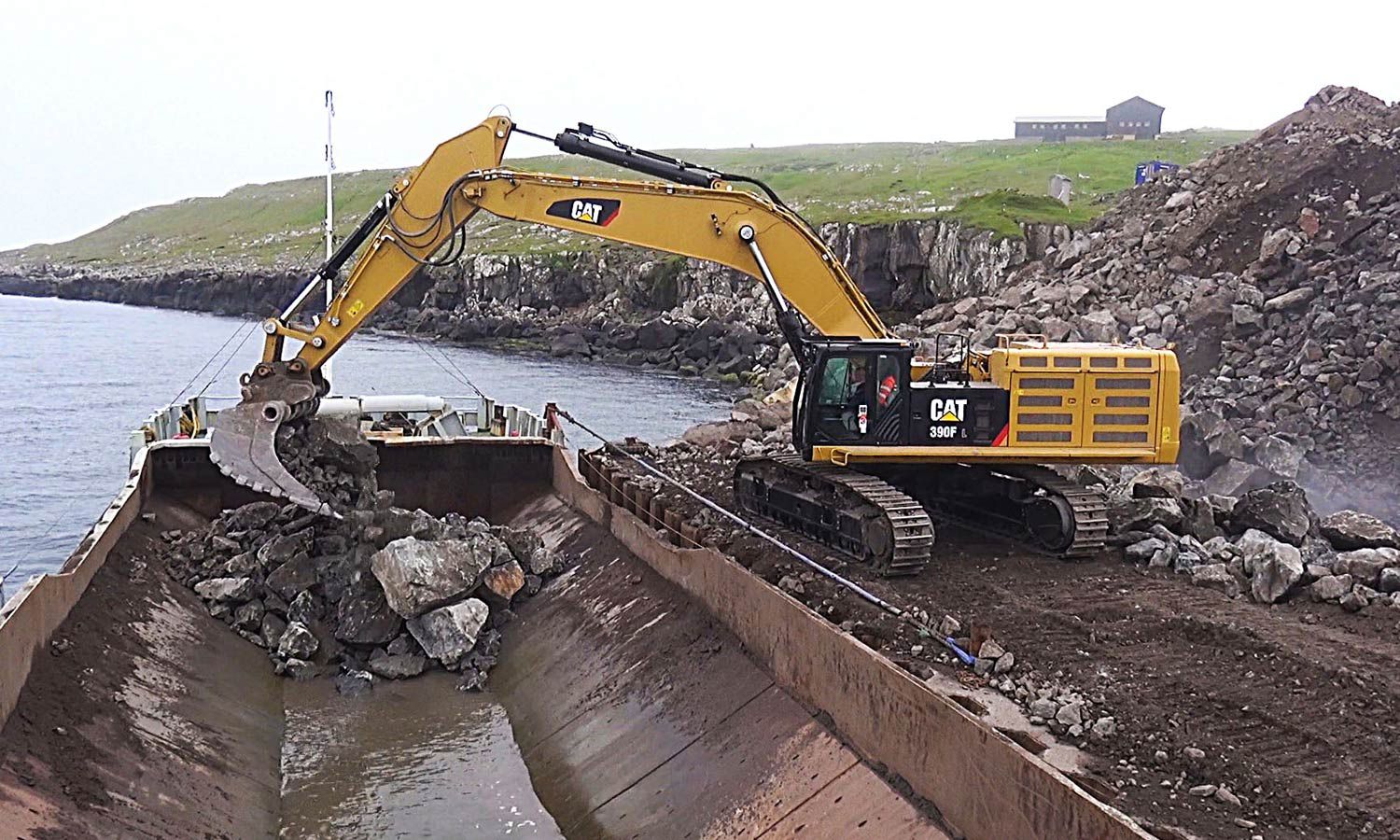 390FL unloads stones from a barge.

The hydraulic excavator 390FL had the task of loading the trucks. It is a versatile machine that has many configurations, tools and tool management functions. It is effective for demanding work with stone materials and breaking work, which is exactly what J & K Petersen Contractors demanded. The Cat C18 ACERT engine also meets the EU Stage IV emission standards. In addition, you can simultaneously select between two modes of power, in the form of a default output and Eco mode, for optimum control of the fuel. The engine can run on B20 biodiesel, which allows for better fuel savings.

The port project is set for completion in November 2019.

Interested in Hire Purchase or other financing solutions? Our experts are here to support you.

Ready to get started? Contact us to learn more about our solutions.